The Society of Seniors announces the 2019 Players Of The Year. SOS Members earn POY Points throughout the year, in seven events. Starting in February with the 2019 Spring Classic played in Palm Bay at the Hammock Beach Resort and ending in early December with the 2019 Ralph Bogart, played at Bear Lakes CC in Palm Beach Gardens.

SENIOR PLAYER OF THE YEAR

Ken Kinkopf, Dublin, Ohio started 2019 with a victory at the Golfweek POY Classic and a third at Kingsway Senior both in January, a sixth place in February at the SOS Spring Classic. Another win at the SOS Senior Masters in April and a third place at the Lowcountry Senior Invitational in May. After his win at the Hesler in July, the 58 year old earned his way to the elite number one spot in Amateur Golf’s Senior Rankings. Kinkopf followed the Hesler with a win at the North South Senior in Pinehurst, a runner up at the Senior Azalea and the Golfweek Senior National Match Play. His year ended with third place finishes at the both the SOS Founders and the Ralph Bogart.

SUPER SENIOR PLAYER OF THE YEAR

Steven Fox, Barboursville, WV notched two Society of Seniors victories in 2019 that included a wire-to-wire win at the SOS Championship at Pine Needles/Mid Pines Resorts. After his first place finish at the Bogart, Fox’s 590 total POY points was 20 points higher than runner-up Evan Long, Charlotte, NC at 570 points. Long was the SOS 2017 and 2018 Super Senior Player Of The Year.

GRAND MASTER PLAYER OF THE YEAR

George Washburn, Frederick, MD, also won two SOS events in 2019. His POY leading total 830 points included a win at the Jack Hesler in Kentucky, a T2 at the John Kline in Savannah, a T6 at the Dale Morey at Pine Needles/ Mid Pines, a first at the Founders Cup in Las Vegas and a second at the Ralph Bogart. Washburn was the SOS Grand Master POY in 2017. John Osborne, Vero Beach, FL was second in the race to the finish with 620 points. Johnny Blank, Frostburg, MD was third at 570 points. 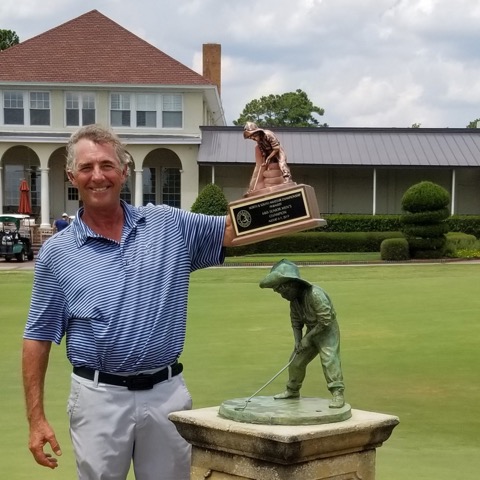