A Fond Farewell To The General

The Deer Creek Golf Course at the Landings Club in Savannah, GA was the site for the 19th and final SOS John Kline Tournament. The Deer Creek course, site of an annual PGA mini-tour event, is one of six courses nestled in the Georgia coastal low country. Designed by Tom Fazio in 1991, Deer Creek has become a second home to the Society of Seniors.

Doug Hanzel, Savannah, GA, continued his most extraordinary 2019 with a 10-shot victory over Greg Sanders, Anchorage, AK and Jack Kearney, Peachtree City, GA. Hanzel started 2019 with a win at the Jones Cup and the Florida Azalea Senior, both in March. Then the nation’s top ranked senior amateur added the Ohio Senior Hall of Fame title in August, before capturing the Senior Porter Cup championship in early September.

Hanzel’s opening round 67 was good for a single shot lead over Steve Maddalena, Jackson, MI and two shots ahead of Kearney. In the second round, Hanzel could only match par with a 72 for a 139 total, but his score increased his lead going into the final round to three shots over Maddalena (68-74) and five shots over Steve Cannady, Pooler, GA (73-71) and Kearney (69-75). Hanzel’s final round 69 was the best score of the day by several shots and good for the win.

In the Super Senior division, Mark Fried, Solon, OH was able to hold off Mark Weston, Windermere, FL for his first Society of Seniors victory. Fried’s opening round 76 trailed first round leader Neil Spitalny, Chattanooga, TN by six shots, but solid second and third rounds of 71-69 erased the deficit. Weston finished strong with a 2-under 70 for a 218 total, two shy of Fried. Savannah’s Allan Small was alone in third at 219 (72-74-73). 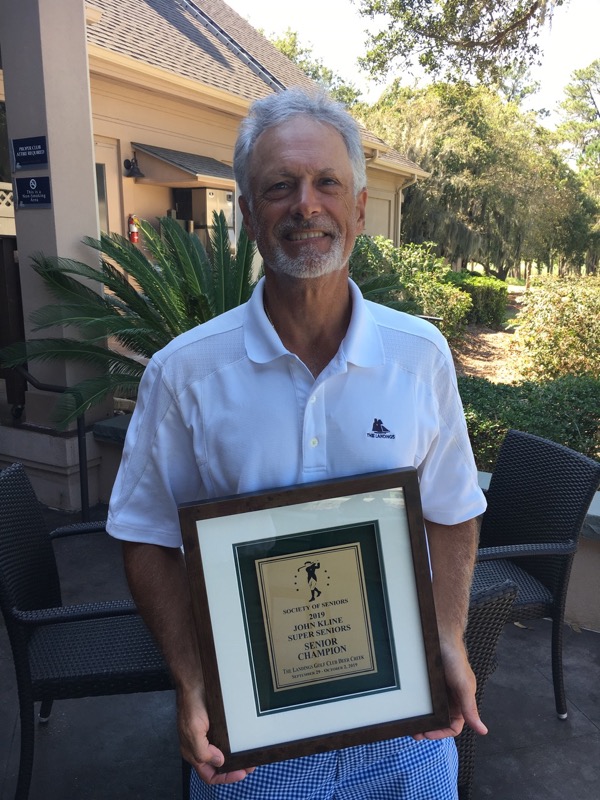