Jupiter Florida’s Ken Kinkopf started the final round of the Senior Masters six shots back. A final round 67 erased the deficit, resulting in a brief playoff and a win on the first hole of sudden death.

The Indian Wells Golf Resort was again the setting for the Society of Seniors Senior Masters. The Players and Celebrity courses, reeling from a harsh winter, bounced back to provide an excellent venue for the competitors.

Kinkopf, riding a wave of success in 2019 including a win at the Golfweek POY Classic in January was able to catch first and second round leader Larry Nunez, Austin, Texas on the final day.

Kinkopf’s par 5 on the first playoff hole was good for the win over Nunez who had posted two sub par 71’s to open the event.

For Tuesday’s first round, the desert winds arrived in the afternoon with gusts in excess of 35 miles per hour. As conditions deteriorated during the round, scoring and shot making became an Olympian effort. Only Nunez was able to break par in the second wave.

Doug Pool, Las Vegas, NV last played the 2017 Senior Masters on shaky legs. Pool was able to limp in with an impressive eight-under total 208 for the win. Pool’s return to Indian Wells in 2019 was equally impressive albeit posting a few more strokes. Steady rounds of 73-71-72 (216) were good for a two shot margin over Bob Kain (218), Cleveland, OH for the Super Senior win. First round leader, two-time SOS Senior Masters winner Jeff Burda, La Quinta, CA posted a fine 1-under 71 before the winds arrived on Tuesday.

In the Grand Masters division, perennial favorite Chris Maletis, Indian Wells, CA held off hard charging Fred Rowland, La Quinta, CA with a solid final round 72 (217). Rowland, the 2016 Senior Masters Grand Master winner fired a closing 70 for a 219 total and runner up position. It was Maletis’ third SOS Title to include the 2005 Tutwiler and the 2015 Senior Master Super Seniors. 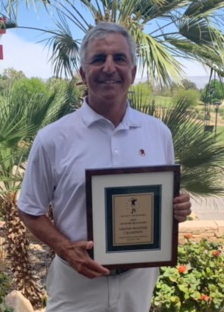 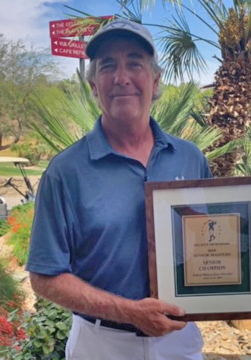 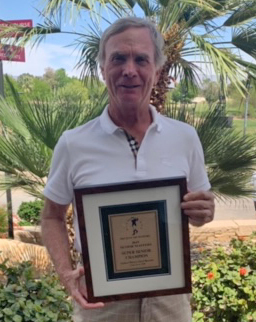