Pine Needles’ award-winning golf course is the first in the nation to be awarded four U.S. Women’s Open Championships, most recently contested in June of 2022. The course was designed by the legendary Donald Ross in 1927, and meticulously restored by Kyle Franz in 2017. Today, the course spans more than 7,000 yards with each rolling hill and fairway bunker reimagined to reflect the challenges Ross envisioned nearly a century ago.

A soft-spoken insurance man, Strawn is the 2021 SOS Player of the year logging 15 top 10 finishes in thus far in 2022. He is on track to repeat his POY title and move to the number one spot in the senior amateur rankings.

Rusty’s methodical approach to golf is not fancy, charting only one birdie in his first and third rounds at Pine Needles. His second round was the one that moved him to the top with birdies at 10 and 12, good for a 2-under 69.

Lee Porter, Pinehurst, NC., in his debut SOS event, was one stroke behind Strawn after two rounds. Back-to-back rounds of 72 had him at 2-over par and hoping to chase down Strawn. Unfortunately, in the final round, an out 40, in contrast to Strawn's steady 35 left Porter well off the pace.

Steve Johnson, Rising Fawn, GA, also playing in his first SOS event was paired with Strawn in the final round. After starting the day two strokes behind Strawn, birdies on holes Nos. 4 and 6 pulled him into a tie with the top-ranked senior golfer in the world.

Strawn kept the pressure on with a final round of 17 pars and one bogey, not giving Johnson much wiggle room. A birdie on the 11th for Johnson gave him some life as he pulled even with Strawn. Another birdie on hole 15 gave Johnson a one-shot lead.

The stage was set, Johnson in the lead with three holes to play. The pair matched pars on hole Nos. 16 and 17. With the honor on the 18th tee, Johnson stepped up and hit his tee shot out of bounds. The 2-shot penalty was too much to overcome, and a double bogey six dropped Johnson to 3-over par for the tournament. Strawn tallied his 17th par of the round to claim a one-shot victory. 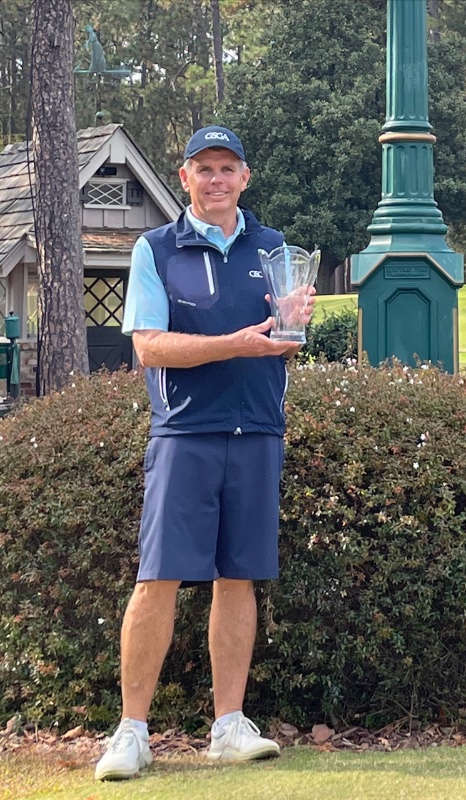