General John Kline acted as the personal sentry for any perspective member for Society of Seniors. You had to get by the General to join. In 2001, the Board of the Society decided to honor Kline with a namesake tournament. For more than 20 years, super seniors gathered to play, pay respect and reminisce. In 2021, the Kline took on a new dimension.

The new John Kline Championship was announced early on February 1 as a “Championship restricted to those members over 70 years old”. More than 90 SOS members initially signed up to play. For a chance play for a national championship, and a chance to once again honor John Kline.

The site of the inaugural Kline Championship was the recently renovated Hobe Sound Golf Club in Hobe Sound, Florida. Tom Fazio, Jr. did the work on the 40-year old course. “The sandy white soil, pines, oaks and scrub oak are the ideal site for golf,” said Fazio. “We worked to exploit these features to create a more sustainable and environment-friendly course.

“My goal was to greatly improve the strategic nature of the golf course; making it more challenging for the better players, less penal for the higher handicapped players, and a course that plays different each day for all players,” he added.

And challenging it was. Windy conditions added to the importance of shot selection to the firm but excellent greens. The final field of 80 players was complimentary to a man. Hobe Sound GC was a great launch for this impressive field.

Rick Woulfe, Ft. Lauderdale, FL with 15 state titles and a 12-time FSGA Player of the Year, was the odds on favorite from the beginning. Usually choosing to play in senior events from the longer 55-64 year old tees, Woulfe came to Hobe Sound with the intention of adding a sixth SOS title to his impressive resume.

And Woulfe didn't just win by a little. After 54 holes, Woulfe was 13 strokes better than Mike McDonald, Williamsburg, VA and Pete Allen, Southport, NC who tied for second place at 11-over par 227. Woulfe carded rounds of 70-72-72 to run away with the Legend Division (65-74) title in the dominating fashion which has made him one of the most-decorated members of the Society of Seniors.

“I played pretty steady for three days, hit a lot of greens and made some nice up and downs,” said Woulfe. “The wind was a factor, especially the first day and I think the rest of the field was having difficulty with the new greens which were redone about two years ago.”

Bobby Lundquist, Sanford, FL finished fourth at 12-over 228 while Evan Long, Charlotte, NC and Dan Donatoni, Malvern, PA tied for fifth at 15-over 231.

With a 17-over score of 233 (78-74-81), 80-year old Joel Hirsch of Highland Park, IL won the Grand Master Division by one stroke over by fellow Illinois resident Gil Stenholm, Burr Ridge, IL.

Hirsch is a two-time winner of the Senior British Amateur championship, who competed in that championship well into his 60s, coming in 18th in 2007 at age 66. That same year he was runner-up in the Canadian Senior Amateur. This was Hirsch’s third SOS win. 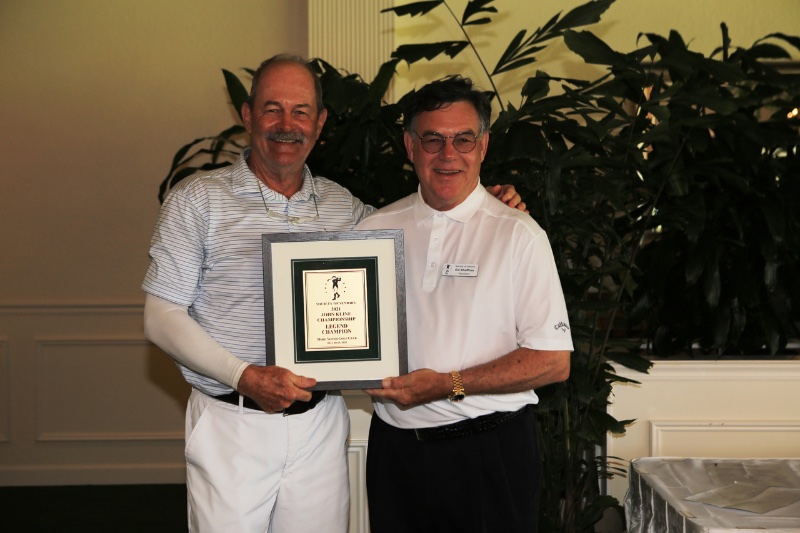